2. Write your Data Config File to the MPVI Interface: In the MPVI Pro Standalone Data Logging Functions​ window you'll see the following. Select the Data Scan Rate (Normal for greater resolution, Slow for less sampling and greater recording duration) and then click on the "Write Config" button (it's shown highlighted below). After you click the Write Config button, you'll see your computer quickly program your MPVI Interface with the new config file. At this point, you're ready to rumble.

1. Open the MPVI Pro Standalone Data Logging Window: After you've selected the parameters/channels that you wish to log (if you don't want to stick with the default selection, you can choose your own by right-clicking on one of the rows in the table and selecting the parameter/channel you wish to log from the menu, just the same as when you wish to monitor live data, then save your config file), open up the VCM Scanner software and move the cursor down to "MPVI Pro Data Logging"​ as shown highlighted below and click on that selection...

The data tells the tale. A look at the laptop shows the data logged through PBIR's turn 10. 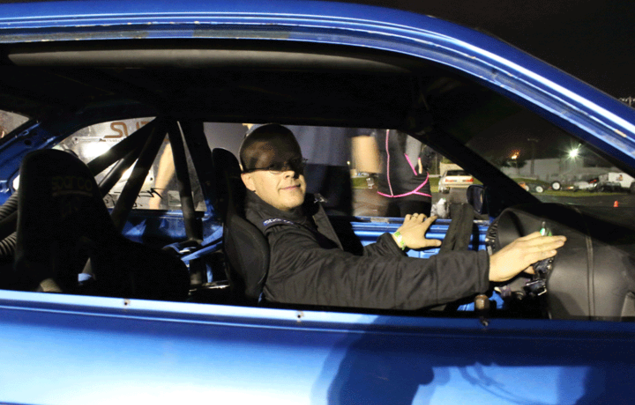 This isn't by coincidence. Anyone who has built a drift car understands that these cars are made to go sideways...waaaaay sideways. So cooling is an issue as the radiator doesn't get much airflow; certainly not as much as the side of the car. To keep things cool, there are plenty of air flow control devices on Harri's M3 as well as a second radiator and fan in the trunk that's fed by additional ducts on the side of the car. With the car strapped to the dyno, tuning is a breeze. As we have a proper load-bearing dyno at the Master Engine Tuner / Speed Shop TV garage, we can actually  program the track layout into the dyno and load the powertrain very similarly to what the car will see in the real world at the race track. Performing a drive simulation like this is a huge advantage over those competitors who do their tuning on an inertia dyno as we're able to do the vast majority of powertrain development in the shop rather than at the track. This makes expensive track time far more cost-effective. Now that we were at the track, we could analyze the data obtained while driving on track and look for answers to the issue that Harri was up against.

The car ran great on the dyno, even after giving it several beatings on the simulated track. The testing required holding 3rd gear for extended periods and running from 4500-7500 RPM while feathering the throttle during the portions of the test that, in this particular case, simulated the carousel at Palm Beach International Raceway's Turn-10. What we were looking for was an answer as to why the power in the car dropped off substantially after making 5 or more runs. Speculation was that the engine was either retarding timing due to false knock from drivetrain noise or that perhaps the intake air temperature was climbing too high and thus resulting in a reduction in total ignition advance. To come up with some answers, we needed to record the on-board data at the track. 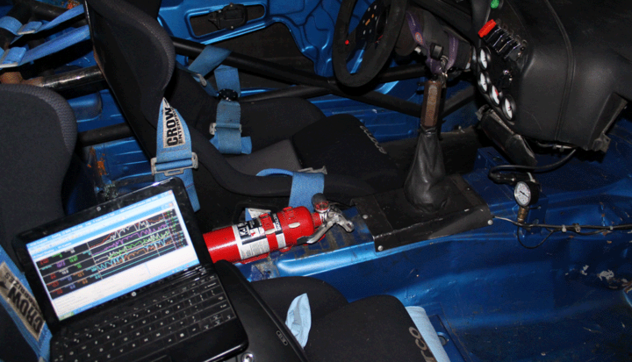 Harri wanted endless reserves of torque for his M3 and he wanted the utmost in reliability, so he installed a 7.0L LS engine and threw on a supercharger for good measure.  This engine can melt tires on demand and do it without much stress, so it's the perfect setup for a full-competition drift car.  Harri Tervola is no amateur, either.  He owns Ter-Tech Motorsports in Lake Worth, FL, and he's built a whole bunch of high-performance hot-rods that are meant to work, not sit in garages or on trailers, so he knows what a car like this requires to make it last through a season of drifting.  To get this engine setup running right, Harri installed his own custom EFI system and wiring harness along with a GM P01 ECU from an '02 Chevy Camaro.  The ECU was calibrated using HP Tuners software.  To make the factory ECU play nicely with the supercharged 7.0L, Harri used the 2-bar custom operating system that HP Tuners makes for just this type of application. Harri chose the HP Tuners system due to the ease of data-logging that the HP Tuner's MPVI interface provides. With the MPVI interface connected to the OBD-2 connector in the vehicle, Harri can data-log until his heart's content without requiring his laptop in the car.  To do the same thing for your GM vehicle and HP Tuners setup, you simply need to configure your MPVI interface to log the data you're after (we'll show you how in a moment) and then drive.  It's that simple.  Once your drive run is over, simply hook up the MPVI interface to your laptop and download the data.  You can then view the data using the HP Tuners Scanner software.  Simple and effective!  In Harri's case, he configured his MPVI interface and went for a run on the drift circuit.  Once his run was over, we downloaded the information to our laptop and then compared the run on the track to the saved data we obtained from our dyno testing at the Master Engine Tuner shop.  What we found was pretty remarkable, but not entirely unexpected.  Before we go into that, we'll give you the quick run-down on the issue Harri wanted to get sorted out.  When the car was put on the dyno and tuned, it ran great and had no issues.

One of the great things about EFI engines is the ability to easily obtain vital data which allows you to dial in your engine quickly and efficiently.  The other great thing about having access to all of this data is the ability to diagnose any drivability issues or other problems the engine may suffer. One example of this is when you've put together your entire engine package and tested it on the dyno, but then somehow things don't quite go to plan when you run your car at the track. This is exactly the situation we ran into with Harri Tervola's LS-powered BMW drift car. 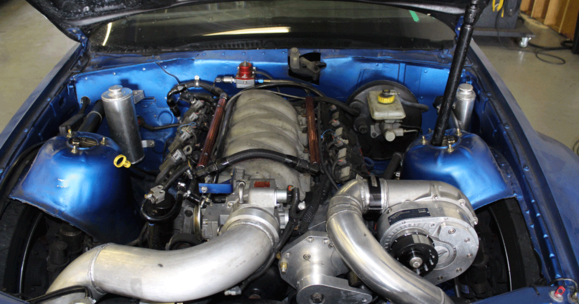