The table above is the Maximum Delta Airflow - P0101 Error. Adjust these values to the maximum value possible of 256. This way, any massive change in air flow during normal operation is ignored by the ECM as a potential problem. The ECM will just make the appropriate fueling and ignition calculations and go about its business. Note also that the P0121 Error Max MAP and P0121 Error Min MAP values were changed from stock as well. By entering "100" and "0" respectively, we've eliminated this diagnostic from causing any issues or forcing limp mode as well. Once all of the above changes have been made, save the calibration with a new file name and program the ECM with the new file. We did just that and then went for a spin around the track...

There are many different reasons that may cause an engine to enter limp mode. Sometimes it occurs due to a diagnostic issue such as a malfunctioning electronic throttle control (pedal or throttle related) or malfunctioning sensor (MAF/MAP), or it may be due to misfires or other such running and/or electrical issues. The takeaway is that the ECM will engage and operate in limp mode when it detects any parameters that are not in line with what it is programmed to determine as normal operation. Hard running issues are obvious, such as multiple misfires or a malfunctioning electronic throttle control system. The ECM would determine that the engine isn't running properly in the former case and enter limp mode to spare the catalytic converters certain death, and in the latter case it may determine that it 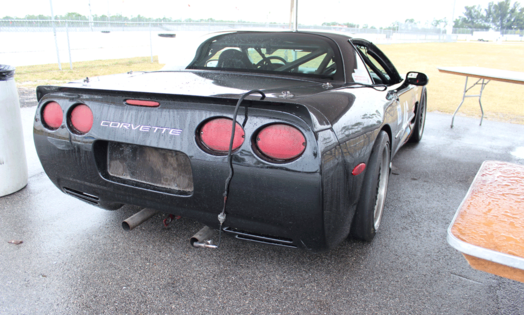 Here too, the stock values appear followed by the new modified values we entered in red. Again, use the max value of "4.10" to prevent this routine from causing you any headaches, then follow that up with the two last changes you'll need to make as shown below. 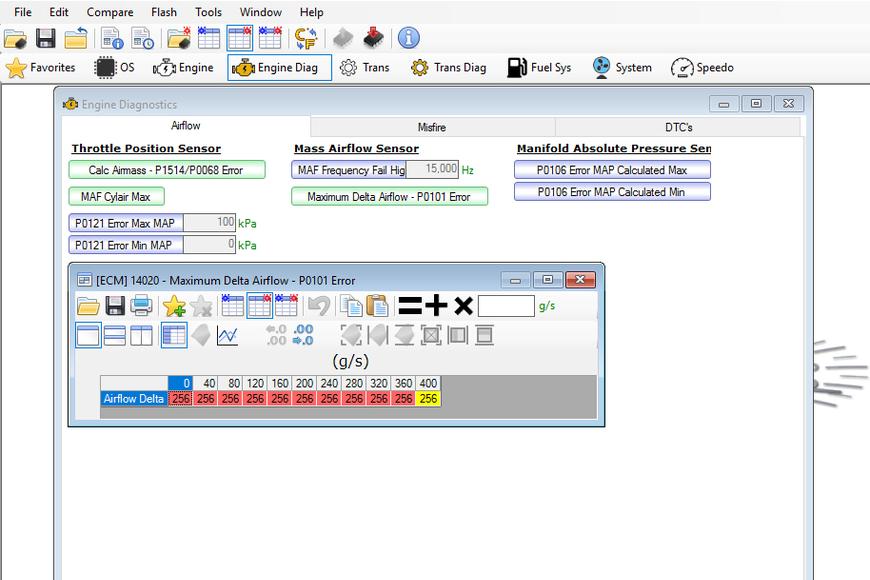 doesn't have adequate control over the electronic throttle and would therefore enter limp mode to force the vehicle to slow and reduce the possibility of the driver facing certain death. Both good things. However, when you're dealing with a modified engine that you've installed in your race car, limp mode may be more of a hassle than a savior. Many folks who have installed aggressive camshafts and/or high flow intake manifolds and cylinder heads have found themselves faced with an ECM that is determining that things have gone awry and thus entered limp mode when in fact things are going exactly as the owner had planned but the ECM just doesn't know it. This is what happened with the C5 race car you see above. After many glorious miles of use and occasional abuse, it was time for the LS6 to go. In its place went a new 525 HP Hot Cam LS3 straight from the GM parts catalog. After the engine was bolted in, the car was run at the track and it was found to be entering limp mode as well as cutting out above 4,000 RPM. Here's how to solve the issue:

The factory ECM calibration is set to monitor air flow into the engine and compare the sensed air flow to the expected air flow tables in the diagnostic routines. It does this to help determine if a sensor has gone bad such as the MAF sensor, MAP or TPS sensors. If the engine now controlled by the ECM (the new fire-breather you just installed) moves more air than the stock engine, and in this case it does, far, far more, then the end result is that the ECM will determine that something must be wrong as the sensed air flow values won't jive with what it thinks should be the case in reality. You could fix this by monitoring airflow values on the dyno or track using your data logging software and then entering values into the tables that are marginally greater so that the ECM retains the diagnostic capability, or you can just eliminate the possibility of the ECM detecting an air flow value great enough to cause concern. We're racers and we're not entirely stupid (we think we can detect most engine running issues ourselves) and so we chose the latter course. To do the same, take a look at how we modified the calibration below. You can find this table under the Engine Diag section in the menu bar, then open the Calc Airmass - P1514/P0068 Error table below the heading Throttle Position Sensor as shown below.

You can see above the stock values followed by the new modified values we entered in red. The value "4.10" is the maximum you may enter in this table. The engine will never exceed that air flow rate, so by entering the maximum value, you've effectively eliminated this function from causing you any headaches. Note that you can switch off the DTC reporting for codes P1514 and P0068 in the DTC section, but all that will do is prevent the ECM from reporting the test. Most operating systems will still run the diagnostic, fail the code, put the engine in limp mode and simply not report why. By entering the maximum value in the table above, you fix this issue. You do the same to the MAF Cylair Max table as shown below:

getting your swagger back

CONTINUE TO PAGE 2
View on Mobile