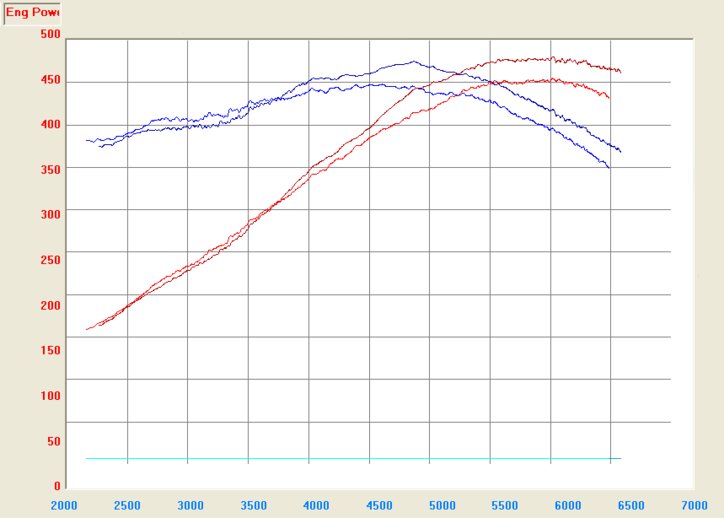 You can see above that the new values are significantly leaner than the stock settings. The Enrichment Ramp In rate and the PE Delay were modified as well. The Enrichment Ramp In was increased to 1.2000 to speed the rate of power enrichment (similar to getting a higher-vacuum-value power valve for you carb guys, so that PE function comes in quicker) and the PE Delay was reduced to 1,500 RPM from the factory setting of 5,000 to allow the PE mode to come in immediately at all engine speeds above 1,500 RPM without delay. Again, it's a track car now, so we don't mind sacrificing fractional exhaust emissions for engine longevity. If you're new to tuning and need the above explained, it's rather simple. The factory setting for stoichiometric AFR is 14.67822. You can find this in the General sub-section of the Fuel section (3rd over from the Power Enrich section above, to the left, 1st in line). The PE table, highlighted in red in the above illustration and labelled EQ Ratio, is simple to understand. Take the stoichiometric value and divide it by the values in the EQ Ratio table to obtain the Commanded AFR in PE mode for each engine speed. For example, at 6,000 RPM, you can see the value 1.130. If you divide 14.67822 by 1.130, the result is 12.99. Thus an air/fuel ratio of 12.99:1 is being commanded at 6,000 rpm in the calibration shown above at WOT. At 4,500 RPM, the Commanded AFR at WOT is 12.79 (14.67822 divided by 1.148 = 12.7859). Easy as pie. Normally the LS7 responds well to the table shown above provided that you've correctly modified the Mass Air Flow tables (high and low). If not, the air flow modelling won't be correct and this PE table goes out the window, among other things. Remember to always command a safe AFR, such as 12:1 when tuning from scratch or if you're new to this. This is strictly to give you a bit of wiggle room should the MAF table be way off and the engine attempt to run lean. Better safe than sorry! Once you close in on your commanded AFR, you can set the PE to run leaner and then finalize the MAF table at WOT. Once the MAF curve is complete and accurate, then go back and set your PE table to the final, desired values.

​With all of the above changes finalized, it was time for one last dyno pull. Note that we didn't alter the ignition timing in this case. This car had been tuned before for the cold-air-induction system as well as the headers, so the ignition timing changes were already made. The point is that the difference in the power curve you see here comes down strictly to the intake manifold and the ever-so-slight leaning of the fuel/air mixture in PE mode at WOT. We think you'll agree that it's a pretty impressive gain for such a simple modification that you can do yourself in just a few hours and tune on your own for maximum performance and efficiency. The overall gains were +28 hp and +27 lbs/ft of torque, but even more appealing is just how much meatier the power-band has become in the 4,600-6,600 RPM range, exactly where you want it for maximum acceleration while on track, and with no loss of torque or drivability whatsoever. Rear-wheel power ended up at 484 HP @ 6,085 RPM and 475 lbs/ft of torque @ 4,885 RPM. That, my friends, is a proper product. And now we have breathing room for a cam...  MET