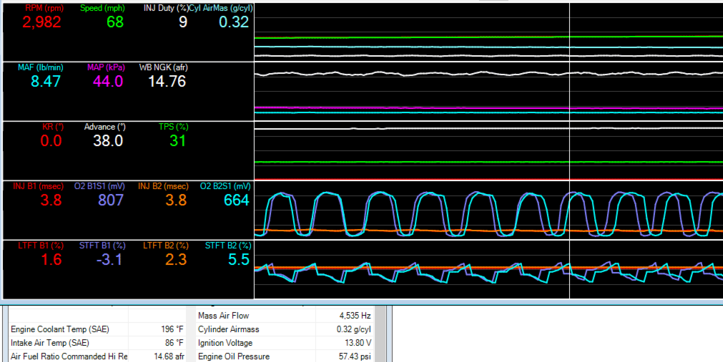 If you find yourself in a situation where the fuel trims are making a sizable correction, such as over 10% richer or leaner, it may behoove you to tweak the airflow table to realize greater accuracy in fuel control. The way I figure it, if you've bothered going through the trouble of testing the car on the track or strapping it down to the dyno, you may as well shoot for as close to perfection as possible and keep tweaking the table until the result is a +/-2% fuel trim. This will result in better overall drivability over all operating modes as the ECM will have adequate fuel trim authority over almost all temperature and environmental conditions. Correction of the deficiencies are shown on the next page...

After establishing that the data is within the proper range, you can move on to testing part-throttle cruise parameters as well as WOT. If your data does not reflect air flow rates similar to the stock values, check for vacuum leaks or disconnected PCV hoses before moving forward. When you're ready to test part-throttle cruise, get the vehicle up into 4th gear at low engine speeds and monitor the same parameters as before (Cylinder Airmass and Long Term Fuel Trims for Bank 1 and 2) as well as Mass Air Flow Frequency (Hz).  Next, verify that the LTFTs are within an acceptable range (+/-15% at normal operating temperature) while driving in 4th gear at various speeds while maintaining a part-throttle setting. We commonly do this on our dyno by recording the data while running the engine at a lower speed, about 2,000 RPM (usually yielding a Mass Air Flow reading of 3,000-3,300 Hz) and holding that speed until the LTFT and STFT stabilizes, then we move up to whatever engine speed results in a 3,500 Hz Mass Air Flow reading, run until the STFT and LTFT stabilizes, then speed up until Mass Air Flow is at 4,000 Hz, repeat and keep doing this until approximately 6,500 Hz at which point you're usually about to enter the range where the EFI system will enter the WOT Power Enrichment (PE) mode. Armed with the data from this testing, you can now make any changes that are needed. If, for example, your data indicated that your LTFT was off by 22% on Bank 1 and 2 at 4,000 Hz, this would mean that the LTFT was adding 22% to the calculated value. A fair bit of a correction, you could say! To correct this, you would then go to the HP Tuners Editor and open up the MAF Calibration table labelled Airflow vs. Freq. Low. This table references the Mass Air Flow frequencies from 1,000 to 5,800 Hz, while the Airflow vs. Freq. High table references 5,800 through 12,200 Hz (which you'll modify for WOT operation). Take a look at the data log in the following illustration. You can see in the GRAPH window that the LTFT for Bank 1 and Bank 2 are 1.6% and 2.3% respectively (lower left side of GRAPH in red and orange font). The GRAPH overlays the CHART window, and if you inspect the CHART, you'll see Mass Air Flow is 4,535 Hz at this same point. What the data shows us is that at this particular MAF frequency, the ECM is compensating for the inaccuracy by adding 1.6-2.3% more fuel depending on the cylinder bank in question. If these correction values were off by a much larger amount, for example by 18%, you would modify the MAF table values in the 4,500 Hz range to correct the airflow modelling inaccuracy. In this particular situation, with only a 2% correction, we're looking fine; text-book perfect, in fact, but that may not always be the case. 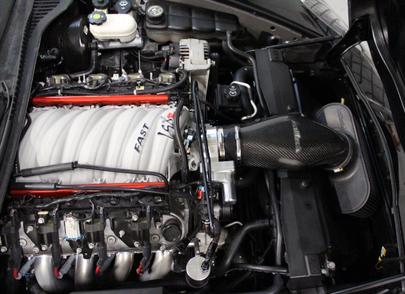 including induction and exhaust from the air filter on back through to the exhaust header collectors. Those components, from air filter back through the exhaust collector, and everything in between, it is those components and their dimensions (and thus air flow capacity and characteristics) that together form the total mass air flow potential and resonant frequency characteristics at the different engine speeds and throttle position settings. When the EFI system is "tuned", one of the first steps is to correct the airflow modelling parameters and tables of the calibration. If the EFI system cannot correctly determine the mass of air entering the cylinders, both fueling and spark ignition timing are compromised and the engine will run with limited efficiency and power at best. In the case of this particular Z06, we had tuned it before when a set of headers was installed along with a new Halltech Super Bee Carbon induction system. As such, not much may have to be done to accomodate the new FAST LSX intake manifold. The quick and easy way to determine whether or not you need to re-tune your EFI after you've installed the new F.A.S.T. intake manifold is to use your HP Tuners to log data from your car while you run the car through 3rd or 4th gear (4th is preferred) from 2,000 through 7,000 RPM. You can do this on the track or on a load-bearing dyno to get accurate data. Why not use 1st or 2nd gear, or a non-load-bearing dyno? Because the cylinders have a different fill rate when under high-load conditions. Running under low-load (even at WOT) may result in mapping your EFI system too lean for extended high-load conditions. You can use a non-load-bearing dyno to good effect if the rollers impose the same weight/inertia as the vehicle has under its own weight on a flat roadway. For a 3,500 lbs car, this means running on a 48" roller if you're using an inertia dyno. But back to the data logging...

Once you have started the engine up and brought it up to normal operating temperature, it's fairly common to see that not much has changed with the installation of the F.A.S.T. intake manifold at idle speed. This is because the cylinder air flow rate with a stock cam doesn't get affected much at all at the idle speed and throttle setting that the otherwise stock LS7 runs at. You can verify this by simply monitoring the air flow using the Cylinder Airmass parameter which reads in g/cyl (0.14-0.18 are typical stock values with the engine at normal operating temp at 650 RPM idle) as well as monitoring the closed-loop O2 fuel correction, specifically the Long-Term Fuel Trim (LTFT). You should see the same rate of correction as stock (usually between +/-15% at normal operating temperature) on the Long-Term Fuel Trim (LTFT), or at  least very similar readings.

We often get asked by those new to tuning "Do you need to get your EFI system re-tuned if you install an intake manifold?" The short answer is "It depends."  The reason it depends is that ANYTHING that changes the air flow through the engine MAY require re-mapping of the EFI calibration. Usually not by much, but then if the calibration isn't perfect, you can expect less-than-perfect performance. When you think of the airflow through the engine, you need to consider the entire engine system,