Get the most out of your distributor ignition

The new ignition electrical wiring and spark plug wires provide a much cleaner look. A custom coil wire will be made to replace the tired unit that's been in service for some time. The effort is well worth it as a tidy electrical and ignition system looks sharp on any car.

One final important step in this installation is to fit a 2-bar MAP sensor to the car so that we can program in timing retard for the ignition when the engine sees boost. In the photo below you can see that we temporarily installed a MAP sensor to the inner frame rail of the car. This will keep the modern components hidden from view and keep the car looking authentic. A steel vacuum line is run down from the intake manifold and the sensor wiring is loomed and routed back along the frame rail to the 6AL-2 ignition controller. Once your happy with your installation, simply drill out the holes needed to mount the sensor and make the installation permanent.

To set the idle timing, you can see above that the 6AL-2 is programmed to pull 25 degrees of timing advance at 0 RPM and 24 degrees at 400 RPM. The thought process here is Total Timing minus the Run Retard. In this case, 34-25=9, and 34-24=10. So you can see that our box is set up to provide 9 degrees of ignition advance while cranking at start-up and will rise to 10 degrees as the engine crests 400 RPM. During regular idle (600-1000 RPM depending on engine temperature) the Run Retard Curve pulls 16 degrees of advance from the 34 Total, giving us an idle advance of 18 degrees BTDC. At 4400 RPM, the Run Retard Curve pulls 9 degrees, so the Total Ignition Timing at 4400 RPM is 25 degrees BTDC (34-9=25). Notice that between 2400-3700 RPM we have more Total Ignition Timing advance than we have from 3700-4700 RPM. This gave us more torque and horsepower. This is the beauty of programmable ignition: You can't get this free power with a set of springs in your centrifugal advance as you'd compromise power above or below your set maximum timing advance. This is a huge advantage, and so is the fact that you can do this simply by using your laptop, rather than fiddling with springs, screw drivers and removing the distributor cap while refining the timing curve. You also would have trouble dialing in boost retard, which is what we do next.

If the engine is under boost, say 5 psi, you can see in the Boost Retard Curve that the ignition will pull a further 7 degrees according to our curve. Using our previous example of 4400 RPM with the Total Ignition Timing of 25 degrees, if we had 5 psi of boost from our blower at that engine speed, the Total Ignition Timing would now be 18 degrees BTDC (34 Total minus 9 from the Run Curve minus 7 from the Boost Curve, or 34-9-7=18). Easy-peasy! Another example; you can see in the Boost Retard Curve that at 10 psi boost, the controller would pull an additional 13 degrees from the Run Retard Curve. At 4400 RPM and 10 psi boost, you'd have 15 degrees of Total Ignition Timing advance (34-9-10=15). At the same boost but at 6000 RPM, you would have 17 degrees Total Ignition Timing (34-4-13=17). Just remember that you set your Total Ignition Timing first at the distributor, lock it down, and then program your Run Retard curve to subtract the necessary timing advance to achieve maximum torque (without knocking or detonating!) and then, if you have a forced induction engine, use the Boost Retard Curve to pull still more timing to suit engine running conditions. We had a great result as you can see below with 515 hp and 465 lbs/ft of torque. Now we just have to go after the slight over-fueling issue we witnessed between 4400-5700 RPM, but that's another story for another time. At least now we have an awesome ignition system in place that'll allow the '32 Hot Rod to make good power and drive like a cream puff all day long. MET 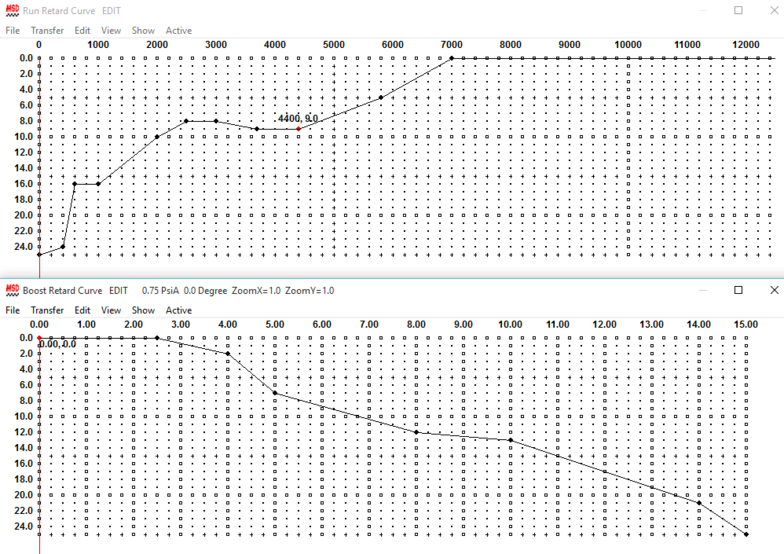 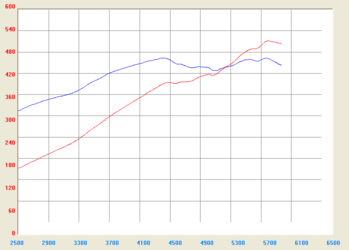 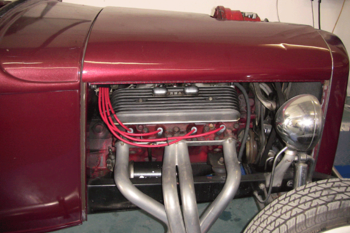 Now that the ignition installation is complete, you can program the unit to provide the optimum timing advance. We put the '32 on the dyno and took a few cracks at it before we settled on the curves below. Remember that these ignition systems rely on a fixed starting point with the distributor set at the Total Ignition Timing Advance, so it's important to lock down your distributor to the maximum spark advance that the engine needs for optimum power. In this case, it was 34 degrees of timing advance with no boost. With the distributor set at 34 degrees BTDC using a timing light, you can now program the "Run Retard Curve" and "Boost Retard Curve". The top curve in the photo below is the Run Retard Curve and the bottom is the Boost Retard Curve (just as it will appear on your laptop when using the MSD Graphview software). 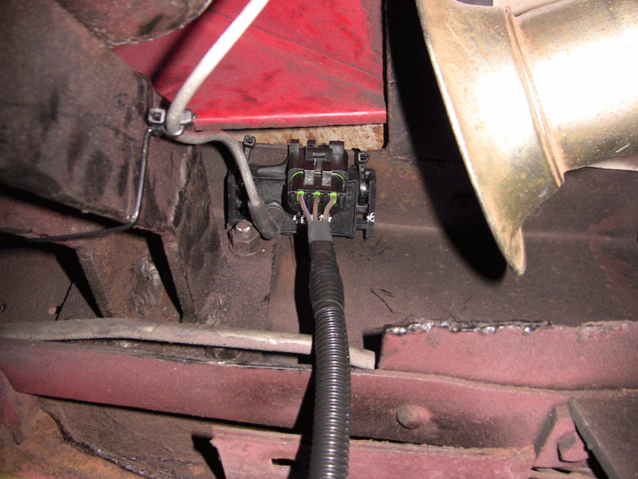 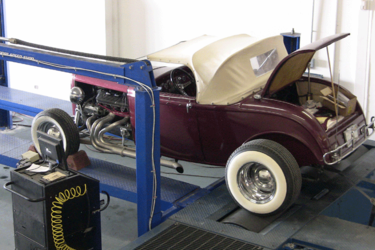 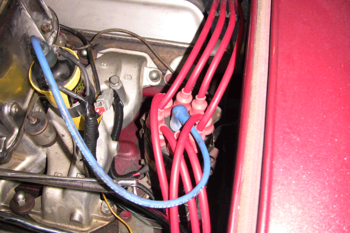