Looking at the data above, you can see the 3 parameters marked with red dots (Engine Coolant Temperature at 181 degrees F, Commanded AFR at 14.66 and Intake Valve Temp at 308 degrees F. Over on the graph side, you can see that engine speed at idle is a steady 1500-1550 RPM. Now you have some baseline numbers to keep in mind as you let the engine cool enough to get back down into the problematic zone. Once the engine has cooled sufficiently, we'll repeat the process of logging the data only this time we expect to see a hunting idle condition as we were told would occur by the race car owner.  After the engine cooled a bit, we logged the following data:

​Above is the IVT Gain table in all of its factory-stock glory. If you co-relate the values from the hunting-idle data log and the table above, you'll see that the fuel enrichment numbers are pretty much spot-on-the-money. Intake valve temperature of 176 and MAP of 75.6 at the higher engine speed (2345 RPM) and IVT of 178 and MAP of 90.6 at the lower engine speed (684 RPM) relates perfectly to the Commanded AFR for both of those engine speed points (12.36 and 11.83 respectively) shown in the data log. If you're unsure of how the values in the IVT Gain table work out to the Commanded AFR, think of it as working similarly to the PE table. It modifies in a similar manner. If that brief explanation doesn't help you, our tuning book, Master EFI Tuner - GM EFI explains it in excruciating detail. You can find that for sale on our Home Page (it's as good of a buy as this plug is shameless!)

To fix the hunting idle issue, we modify the IVT Gain table accordingly. Below is the new table calibration.

Light-weight racing clutches pose a few challenges to those who tune and calibrate racing engines. A stock clutch and flywheel assembly can weigh up to (and sometimes over) 50 lbs. That's a lot of inertia working to keep the engine idling nice and smoothly at low engine speeds; as low as 525 RPM on some cars. Racing engines, on the other hand, require snappy throttle response and this means that the clutch needs to be light. The lighter, the better. For speed, that is. For idle stability, light clutches just don't help. Some race cars use light-weight carbon triple-disc clutch assemblies that weigh only 11 lbs. The Trans-Am race car you see to the left has a button-type carbon clutch. It weighs 7 lbs and contributes nothing

toward idle quality. When you combine that with the big, lumpy cam in the engine, the idle speed runs pretty high for a V8. 1500 RPM at normal operating temperature is about what it takes to keep this engine idling smoothly with such a light-weight clutch and high-compression. That's nothing compared to an F1 engine, but hey, it is a large-displacement V8 after all.

In this particular car, the engine in question is the series-spec GM LS engine. An E38 engine control computer is used. If you buy GM's Crate-Engine ECU kit, you get an appropriate calibration that stands a chance of idling decently, but even those may not depending on your particular engine specs. This particular car came with an E38 from a donor car that was scrapped due to accident damage. The engine was tuned and calibrated decently, but the problem that existed was a hunting idle right after start-up and during the warm-up phase. Lots of racers running carbureted LS engines know this problem well. But, with EFI, you have options available and you don't have to suffer this problem if you decide to go with a light-weight clutch. When faced with an issue such as this, the factory EFI system along with a good data-logger allows you to see what the engine is doing when the idle is hunting and surging. You can then analyze that data and modify your EFI calibration to cure the problem.

The first step is determining under what conditions the idle hunts. In this case, the car in question can idle well when it's at normal operating temperature. So, first thing to do is log the engine data during the known-good operating conditions to record your baseline performance. You can see that in the screen-shot below.

​As you can see above, the IVT Gain table is adjusted to ramp down the excess fueling quickly after startup and return to the stoichiometric fuel mixture required for a smooth, stable idle speed immediately after engine start-up. As always, inspect what you expect and log the data to be sure the job is done. Below is the last data log and graph showing engine start-up and what turned out to be a successful calibration. The engine starts quickly and runs at a slightly higher idle speed to aid in warm up (1700 RPM as seen below and commanded in the Target Idle Speed table) and it does so smoothly. As the engine warms to normal operating temperature, the idle speed is reduced back down to 1500 RPM. Job done. Now when you swap in a light-weight clutch, a hunting and surging idle won't be your problem; you'll only have to worry about where you'll put your next trophy. MET 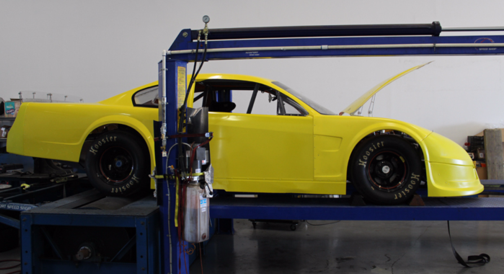 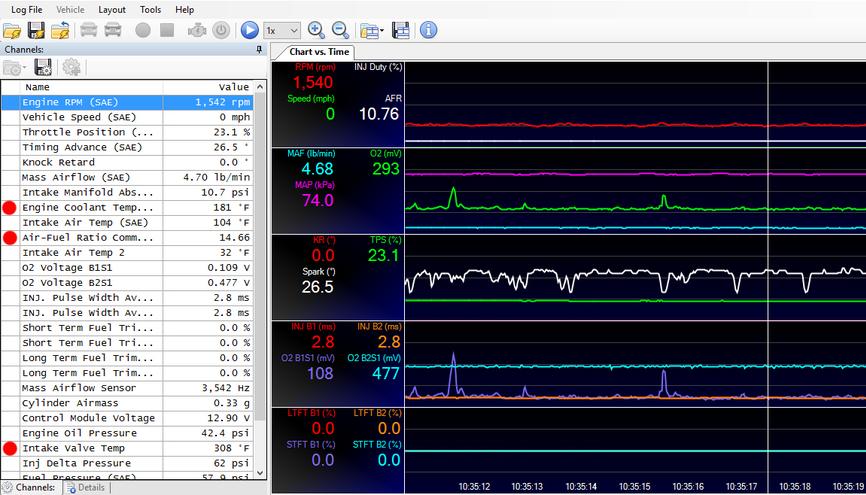 In the two screen-shots above, you can see the same 3 parameters marked with red dots (Engine Coolant Temperature at approximately 151-153 degrees F, Commanded AFR between 12.36-11.83:1 and Intake Valve Temp between 176-178 degrees F. You can also see on the graph that engine idle speed fluctuates between about 2350 and 680 RPM. That's a pretty wide swing. Notice that it doesn't stall. The engine hunts quite consistently and stays between that same range. If you look at the injector pulse-width, you'll see that it varies between 3.4 and 5.3 ms. The baseline data we collected earlier indicated a fuel injector pulse-width of a steady 2.8 ms, no doubt due to the steady Commanded AFR. Also notice the throttle positions (TPS %) of the graphs, both baseline and the ones immediately above. The TPS is at a steady 23 % when the engine runs well and at a steady 26.7 % when the engine is hunting for idle. The TPS values are marginally different, but they are steady and that is the important thing to note here. Throttle movement (in this case, the clear lack of) is not responsible for the funky idle. We can see, though, that MAP changes and that is to be expected with no change in throttle position but a change in engine speed. At lower engine speeds, there is plenty of time for the intake manifold to fill with air as compared to a higher engine speed for a given throttle opening. Knowing this, we can eliminate air flow as a potential problem.​

​A hotter intake valve vaporizes a higher percentage of the fuel injected, therefore less fuel is needed. When the intake valve is colder, more fuel must be injected to make up for the lower amount of fuel vaporized and thus capable of burning. Makes sense, right? The issue here is that at our higher desired idle speed of 1500 RPM, we may not need additional fueling. To correct this, we open up the IVT table and check to see if that's our culprit. 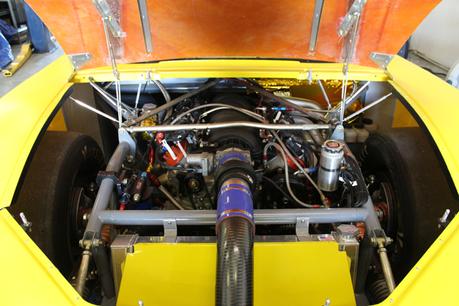 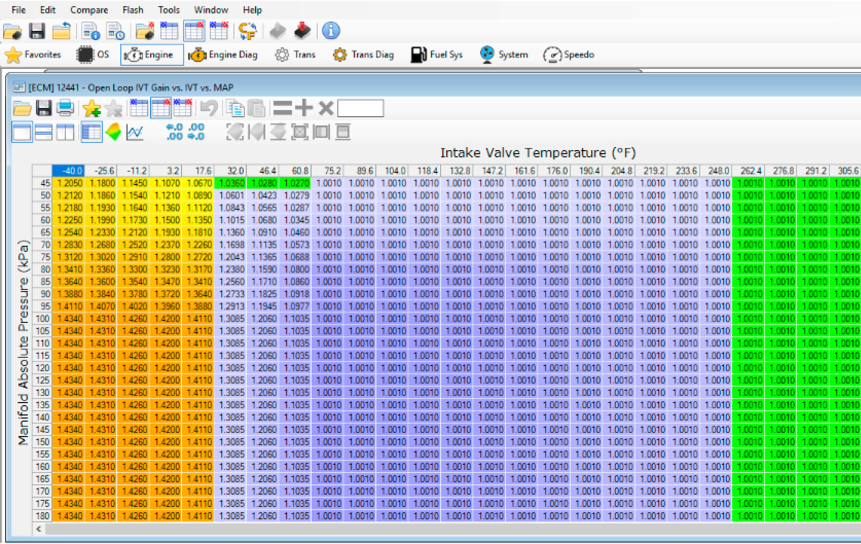 ​Looking at ignition timing and spark advance, we can see in the graphs above that the ignition is reacting to the engine speed. Cross-checking the spark advance values in the data with those in the ignition maps can assure you of correct operation, but here we can see the more obvious culprit is fueling. As the Commanded AFR is varying quite significantly when the engine is not at normal operating temperature, we need to look at the Intake Valve Temperature Gain (ITV) table. This table is responsible for commanding extra fuel when the intake valve temperature is calculated to be below normal operating temperature. During transient conditions (rapidly changing engine speed), the amount of fuel vaporized when it comes in contact with the intake valve differs when compared to the engine coolant temperature. 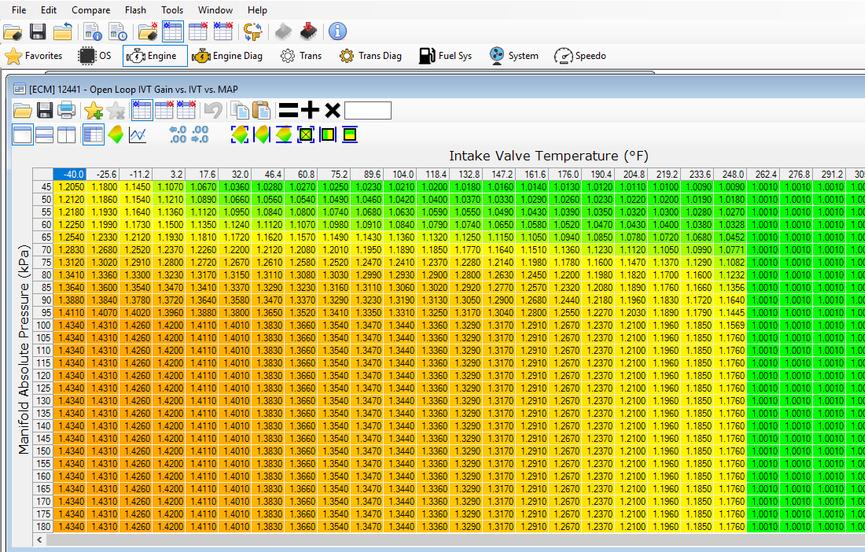 is it air, fuel, ignition or all of the above? The data-logger tells all! 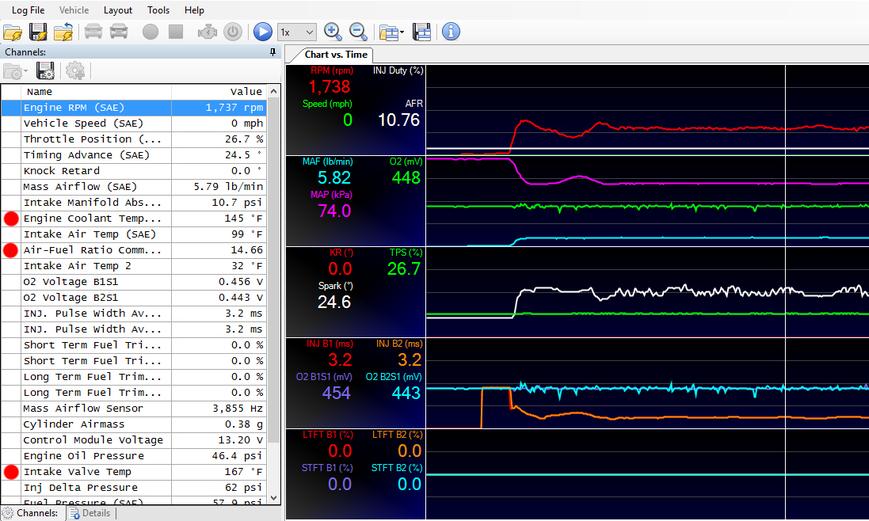