To log the data, open up the VCM Scanner software and simply connect with the vehicle and click on the "Record" icon up in the menu bar before you set off. Once you've gathered a small amount of data, save the data file so that you may refer to it as needed. If the engine and engine oil were at normal operating temperature, you don't need a long data gathering session...a few minutes, tops. Your gathered data should look similar to ours as shown below:

Circled above is the portion of the MAF calibration that corresponds to approximately 2,994 Hz. The red arrow points to the section of the transfer curve that these cells correspond to. It's nice to have a visual reference to be able to see how smooth the curve looks as you alter the values. Notice above that both the values for 2,950 and 3,100 Hz are highlighted. We selected these two cells as they're on either side of our data frequency value. As the data indicated that the calibration was off by 9.4% (the negative number means that in Closed Loop, the PCM was subtracting 9.4% fuel, while a positive value would indicate that the PCM is correcting by adding 9.4%), we'll subtract 9% from our MAF curve in that specific area. To do this, enter "0.91" into the "adjust by" box beside the " = + x " icons in the menu bar as we did above. Then click the multiply-by icon, the "x", and you'll see in the illustration below that the values have been reduced by 9% (for example, in the cell for 2,950 Hz, 123 x 0.91 = 111.93). You would then move further along your data log to find the values at 3,550 Hz, 4,000 Hz, etc, etc, and adjust the MAF curve by the correction that the LTFT indicates in the logs. Note that you don't need a wideband O2 sensor while you're modifying the calibration during regular driving in Closed Loop while at normal operating temperature.

Highlighted in the above you can see that the Mass Airflow Sensor is reading 2,994Hz. The Long Term Fuel Trim for both Bank 1 and Bank 2 is at -9.4%. Notice that you can also see LTFT B1 and LTFT B2 in the graphing section to the right of the table (also circled in red). These are the numbers you're after! What this tells us is that the PCM is pulling 9.4% of the commanded fuel at this engine speed and load point. We see that the MAF Frequency is 2,994 Hz, so this is where we make our first change. The goal is to gather data for the entire MAF frequency range and make your adjustments to the curve as accurately as possible. To make life easy, it's best to tackle this task in 500 Hz incremements and use the software Interpolate feature to fill in the holes. Take a look below.

Going back to the data log, we move further up the data to where we drove under greater load. Below you can see that at 7,029 Hz, the correction was approximately -7%, meaning the engine was running 7% rich and the PCM was correcting by subtracting 7% of the calculated fuel. Again, correct the calibration by going back to the MAF table and reducing the value in that frequency range by 7%. 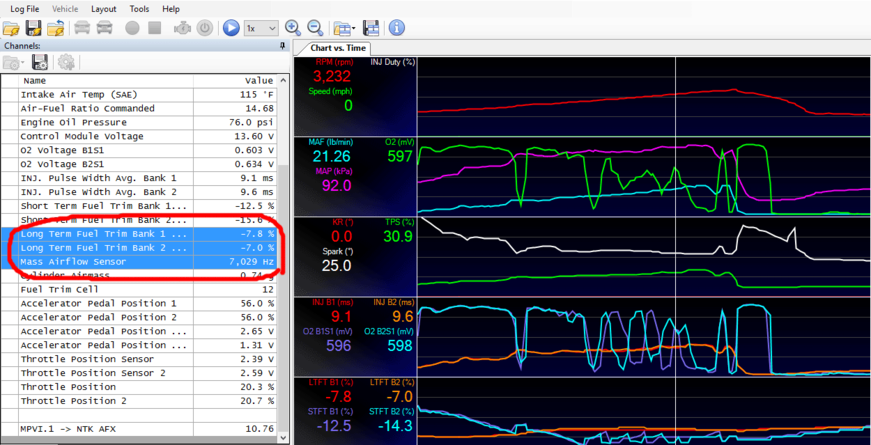 swapping in GM's LS3 for more power and fuel efficiency

Above we continued adjusting for 3,550 and 4,000 Hz. At 4,000 Hz, we saw in our data log that the fuel was being corrected by reducing 12%. The original value of 267.7 was multiplied by 0.88 to arrive at the 235.6 that you see above. Now that you have three sections adjusted, you can use the Interpolate function to fill in the blanks. Taking a look at the screenshots below, you'll see that we entered 0.91 again in the adjustment cell to adjust all of the values below 2,950 Hz by that amount as those frequencies are used at below idle speed...not a big factor, but not worth ignoring either, so we corrected these cells similarly to what we did at approximately 3,000 Hz at our idle speed. Next, you can see that the red arrow points to the Interpolate icon in the menu bar. When you highlight a group of cells, such as we did below between 3,100-3,550 Hz, and you click on the Interpolate icon, it will automatically adjust the values in between the outer-most cells by mathematical interpolation...or magic. Whatever. It works incredibly well, this HP Tuners software! Repeat the process for the values between 3,550-4,000 Hz and you can see those changes below as well. You can also see that, compared to the above, the shape of the MAF curve has changed and that the interpolate function has smoothed the curve. As you continue adjusting the Low Speed curve in 500 Hz increments, Interpolate the values in between and keep doing so until you've adjusted all of the values up to 5,800 Hz, which is the highest value in the Low Speed table. Then you can move on to the High Speed table which is for greater than 5,800 Hz. 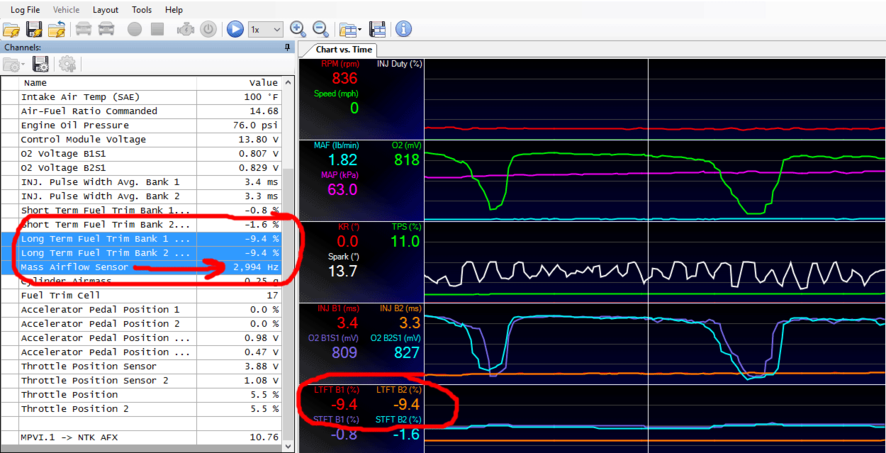