pressure back and save fuel (not burning extra to needlessly increase line pressure and add heat to the fluid by pumping harder) or you can increase line pressure when shifting more aggressively during acceleration to reduce clutch slip and thus transmission temperature. You can see the win-win situation here, can't you? Below you'll find the original Shift Time table along with our modified table.

The last thing we'll do before we move on to the Torque Converter Clutch settings is to take care of the Torque Reduction table. As you can see below, we've lowered the values in the high-output ranges, greater than 369 lbs/ft, slightly to reduce the amount of Torque Reduction the TCM requests from the Engine Control Module when shifting. If you enter a "0" in all of these cells, there will be no Torque Reduction from the ECM and the trans will get hit with the full force of the engine while shifting. This doesn't do much for reliability and it'll only serve to put extra wear on the clutches. Command only as much torque reduction as you feel necessary to maintain a crisp shift feel without putting undue burden on the transmission hard parts. This is rather subjective as each individual has his/her own tastes for how hard the shifts hit at WOT.

Now we can move on to the Torque Converter Clutch (TCC) settings. On the left side of the HP Tuners software below you will find TCC Duty Cycle with two tables below it; Maximum and Minimum. You can leave the Maximum settings alone, but if you open the Minimum table, you'll see one much like that below:

The stock values appear in the first screen-shot while our changes are highlighted in red. Notice that we set everything to 90. This table allows the TCM to control Torque Converter Clutch slip during engagement. The low values enable the TCC to come on when applied in an almost imperceptible manner as the TCM can regulate the TCC duty cycle between the minimum and maximum values to smoothly engage the TCC using a controlled slip. This is fine for Grand-Ma who doesn't want to feel a thing. We, however, would rather have no TCC slip and enjoy the reduced transmission operating temperatures that come with that strategy. Slip is heat, and the less slip, the less heat (as long as we're careful not to make shifts so hard that our heads hurt). By increasing the values to 90, we're effectively telling the TCM to apply full TCC duty cycle and thus pressure whenever it's commanded to actuate. In real life, it'll feel like you've made another gear change...nothing undue at all, but you'll see 5-10 degree cooler trans temps when you're driving in heavy traffic during the summer months.

In the tables above you can see that for the 3rd to 4th and the 4th to 5th rows that the value is 0. Clearly this calibration can operate a 5-speed transmission, but here we're only dealing with 4 (we'll get to the 6L80/90E in an upcoming article). In the 1st to 2nd and 2nd to 3rd shift time rows you can see that the original calibration calls for anywhere from 0.200 seconds to 0.500 seconds. In our table (the changes seen highlighted in blue), we've reduced the values at and above 369 lbs/ft to 0. This doesn't mean that the shifts will occur that fast (it's physically impossible), but it does instruct the TCM to make the shift occur as quickly as is possible. Our desired shift time is 0.00 seconds at and above 369 lbs/ft of torque output; below that we're happy with a nice smooth shift and we've left that as-is. At higher engine output levels, we'd like to see no shift lag, but we'll simply have to live with the best that reality has to offer.

One other issue we'll take care of is the sloppy shifting at lower engine output levels that doesn't have to do with time so much as it does shift pressure. As our Corvette accelerates, the car almost feels as if it falls over when shifting at light throttle settings. This results in a bit of head bobbing and unfortunately also means higher transmission temperatures. To fix this, we bumped up line pressure during the shifts as shown below. Note that this is independent of Shift Time. At light throttle settings, we don't mind a slower shift, but we don't want a sloppy shift that results in us bobbing our heads fore and aft while the transmission does it's thing, so we increase line pressure to make clutch engagement more positive. This reduced slip will also decrease overall transmission operating temperature.

Next we move on to Shift Time and Shift Pressure. Shift Time is the desired length of time to shift from one gear to the next. In an automatic transmission, shifts don't occur suddenly; they occur slowly as a controlled slip. Taking more time smooths the shift and offers a more luxurious feel. A fast shift feels sudden and abrupt, lacking a sense of refinement as little, or no clutch slip occurs. The former is great when you're cruising around town, but the latter is preferable when you're accelerating as quickly as possible. With older mechanically-controlled transmissions, you'd set the trans up for one or the other using the Throttle-Valve cable or installing a shift-kit. With electronic control, you get the best of both worlds. The same goes for Shift Pressure. At light loads such as part throttle cruise, you can dial line 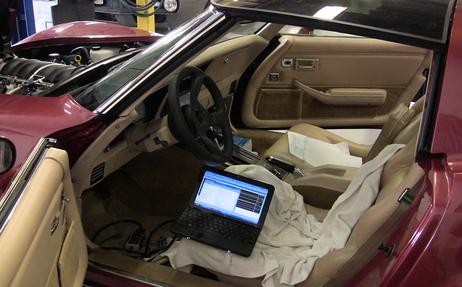